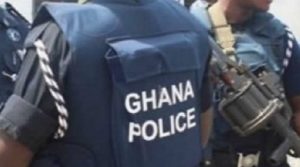 A 65-year-old unemployed mother has allegedly assaulted a police officer at Ashaiman over a misunderstanding.

The prosecutor of the case, ASP Akwasi Afrifa, said on October 29, 2020, at about 5:30 am, the complainant, LCpl Eugene Seyram Dzakpasu was discharged to the district to maintain calm ahead of an expected visit by President Nana Akufo-Addo. He said in the discharge of his duty, LCpl Dzakpasu met suspects Seth Adimeh, 31, and Robert Kwakumey, 37, arguing with a police dispatch rider and tried to resolve the issue.

Days later, LCpl Dzakpasu was allegedly confronted by the suspects and their mother who allegedly slapped him severally with menstrual cloth (amonsie).

The uniformed 37-year-old could not retaliate because he was overpowered by the suspects. The case has been transferred to the Ashaiman Circuit Court.

ASP Afrifa advised the public not to take the law into their hands and eschew the act of attacking police officers and other law enforcement personnel.

Assemblyman Hon. Thomas Awotwe donates to the needy, widows, and widowers at the Nsuta Electoral area at Tarkwa ahead of Christmas.

Bill Gates and Melinda Gates to divorce With $146 Billion at...

Beginner: Are you stuck in programming should not do

Body of unidentified woman found dumped by the roadside