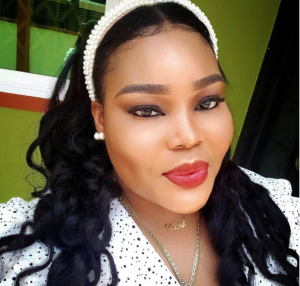 Gospel musician, Ceccy Twum, says her husband had to convince her mother to accept his proposal because she was very young at the time he proposed to her.

The ‘Megyefo Ne Yesu’ composer stated that her husband, Prophet Alex Twum, walked straight to her mum and asked of her hand in marriage. The singer, who said she has been married for 21 years, made this revelation in an interview with popular presenter Stacy Amoateng on the ‘Restoration’ Show.

My mum asked why I wanted to marry early because I didn’t understand it. She thought I would want to explore, she said. I told her I have been a church girl all my life so it’s okay. By the grace of God, my husband is okay with me and I don’t feel its bad I married that time. I have been married for 21 years, she noted.

Additionally, she said though she wasn’t ready for marriage it has caused her more good than harm, unlike others who have issues when they tie the knot early. I married at age 19. My husband and I were in the same church. I was a singer and hadn’t even prayed about marriage. My interest was in singing. “He didn’t talk to me about marriage. He rather told my mother. So I asked why he had to tell my mum when I’m the one he’d marry,” Ceccy Twum revealed. I think the reason he rather told my mum was the fact that I was very young and so even if I say ‘yes’ to him, my mother would have the final say,”. “I never thought of marrying a pastor. I didn’t want to be restricted; I wanted a free life. Till date, if you try to restrict me, I become worried. But my husband isn’t an oppressor. He gives me the room to operate; it’s been very helpful,” she added.

Doctors And Nurses Arrested For Selling Of Babies

22-Year old lady Commits Suicide after a Pastor and her mother...

Fella Makafui and I have Sex a lot Am afraid of...

The 10 Runway Trends You’ll Be Wearing This Year

My advice and calls you rejected, give ears to my words...

VGMA22: Video Of How Heartbroken And Disappointed KiDi Stormed Out Of...