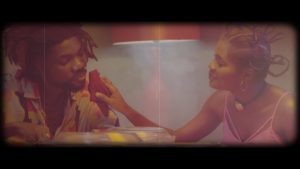 Akan finally dropped the visuals to his song with Efya titled ‘Menseida’. The video which dropped on Friday, September 25, reflects the message in the song, heartbreaks aren’t the end one must move on.

Akan sings about the pain from his heartbreak but also talks about moving on and not letting it stop him from enjoying himself.

The Fodoa and Prince Ibam directed video highlights the message from subtle hints in Akan’s “Gx Divorced” registered car to the artiste having the time of his life being fed and pampered by beautiful women and generally living free.

Seemingly switching between channels in the video, he’s presented with the various “enjoyment” options he can have now that he’s single.

It’s the perfect song to celebrate a breakup and Akan confirms that, “The underlying message in the song is about staying hopeful and strong. There is always more ahead. If a move doesn’t go well, I would rather move on than cry over spilt milk”

With Efya’s perfect vocals on the song, watch the music video which has strong themes of the Ghanaian culture. Kindly watch below.

Who Is Sister Sandy? Here’s Everything About The Ghanaian Guyest TV...

Show HN: ResMaps – See who is viewing your resume are...